Hey Earthling: The Story Behind the Music Video 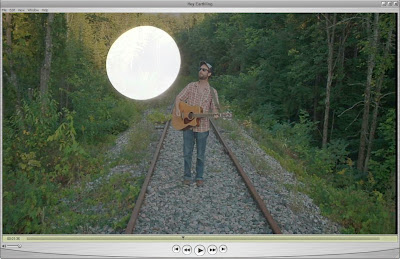 Hey Earthling, the video, was filmed by a creative partner in crime, Sylvain Morin. Sylvain & I play his songs ensemble (gigging very occasionally), & he's has helped edit & produce a couple of my previous music videos (Enough's Enough & Nature's House). We started the shoot with a vague idea of what we were going to do, & Sylvain added aspects as we went along to tell a story. He wanted to do more filming, to add an urban aspect to juxtapose against the Nature one, which I didn't think was necessary & couldn't be bothered with. (That yin-yang effect came together elsewise later, in editing.) Hence, the footage sat on two SD cards (from the 2 cams we used) untouched for 8 months. Finally I reviewed the footage, & at long last saved it to my computer; there was clearly enough to make a solid video already existing, & when Sylvain saw it he heartily agreed. We booked time at SAW Video, and the 1st night Ottawa Explosion fest was also taking place at the neighbouring SAW Gallery & in the shared courtyard. Hence there was beer for sale, tons of excitement around, plus several of my concert-going friends stumbling about in various states of intoxication. Technical difficulties ensued at a couple sessions after, for instance with us finalizing the video with no proper speakers (with just 1 set of headphones between us, or perhaps the built-in computer speaker), but we prevailed & are quite happy with our home-made video, which is firmly in our style.